US cities with the highest number of local moves

The location a company operates within is a very influential factor in the moving industry. It’s simple – some states and cities are easy to dominate, while others are highly competitive. And based on this, you will be able to decide how best to focus the services and advertising of your business. After all, how profitable would it be to focus on local moving projects in a city that has a low local moving rate? Instead, you might be wiser to re-focus your efforts on the most profitable relocation types for that particular area. Today, we take a closer look at the US cities with the highest number of local moves – those that are great for the local moving business this season.

What part do local moving jobs play in the modern moving business?

According to moving industry statistics, the percentage of local moves has been dropping in the past years in comparison to interstate ones. However, this doesn’t mean that moving businesses should give up on providing local moving expertise. In fact, certain cities in the US are more than suitable for this particular type of service. And for companies with locations in those cities or nearby, that is a deep well of potential clients and revenue. Hence, you should take a closer look at our list of the most popular cities for local moves this season.

The effects COVID-19 had on moving trends in US cities

With the pandemic and rioting having caused such an impact on the overall situation in the US, it is only natural that migration trends were influenced. And so, the moving industry has had to battle with the sense of panic that struck those living in metro areas and were fighting between moving outside city borders and roughing it out. Most, however, chose to remain where they were, while certain cities were considered too risky for others to settle there.

And so, studies of local and interstate moving trends in the US show us which cities were considered as critical destinations for moving:

All these cities were pandemic hotspots and drove people away from finding their new homes there in the past several months. Not only that, but they all saw 50-80 percent moving jobs outside their borders. On the other side of the specter, we have cities that saw progress during this year:

While certain cities were positively or negatively affected by the crisis of 2020, there were those that simply lost business. And although the moving industry was proclaimed an essential business, companies in these cities saw a loss in profits when it comes to everyday work. So, here are the cities that recorded the biggest drops in the number of moves in comparison to 2019: 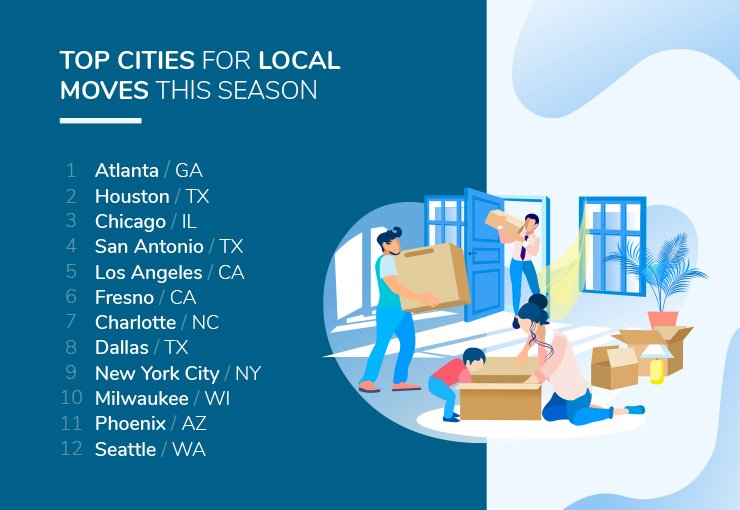 People living in large and developing cities have little reasons to live outside city borders, let alone cross state lines in search of a new home. After all, when you have a prospective job in a city that is economically strong and suitable for starting a family, what more is there to yearn for? The only concern people have is whether they want a bigger home or a quieter neighborhood to live in. So, here is a closer look at the top cities on this list and the reasoning behind it all:

Every company has to begin its story somewhere. And for moving companies, that beginning is found in local relocation jobs. Offering local moving services is the bread and butter of any professional moving business. It lays the foundation for the development of your brand in the future days to come. You start small, only to expand onto other forms of moving services – long distance moves, cross country relocation, international moving, etc. And with each new distance you cross for the sake of relocation, your revenue and reputation will grow. So, the question you need to ask yourself is whether local moving projects are the priority of your work this busy season?

Movers Development is a New York based company, founded with the idea to serve moving companies with contemporary solutions in web design and SEO.

Get Informed With The Newsletter

The importance of strategic brand management for moving companies

How often should you blog?

The importance of metadata for movers